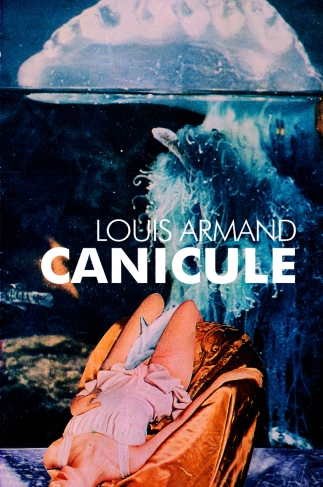 CANCIULE is a savage coming-of-age story through the prism of 1970s terrorism, the fall of the Berlin Wall, and the Israel-Lebanon War… Three friends, each of them orphans, are brought together by fate in a small Baltic seaside town. Bit by bit their friendship turns to betrayal. When one of them commits suicide, the emptiness of their lives is laid bare… In the present, a sudden random act of violence brings two women together in mutual need and self-discovery. As the destinies of its protagonists intertwine, a story unfolds of love and betrayal in a time of failed ideology and moral crisis. By turns cinematic, hard-boiled, sensual, Canicule continues Armand’s exploration of the underside of the human condition.

“Armand’s characters are all caught up in that attempt to retreat from the flow of time. The great histories that are the backdrop to his narrative and the characters’ lives are the looming presences of life that requires we keep track of time, because it is always getting late there, and the urgency of the timetable is felt here as that of a doomsday clock. The tension in the novel is between a kind of vita otiose, understood as an impatient disappearance from life and from history, on the one hand, and epiphanies of death and history and time on the other. It is a tension that for each of the characters in their different ways becomes a process of undoing and dissolution, a threatened negligence from often self-imposed states of suspension.” Richard Marshall, 3:AM Magazine END_OF_DOCUMENT_TOKEN_TO_BE_REPLACED