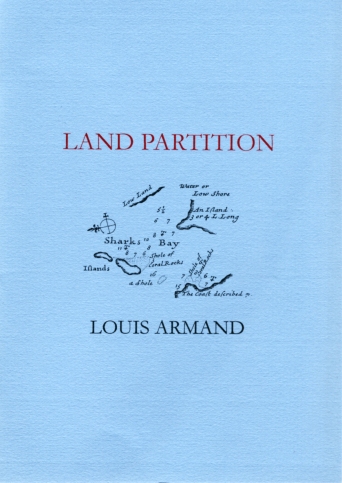 or order the paperback here

“Armand’s ideal poet controls not primarily with language’s rhythmic music, but with how words collide and warp upon themselves …”
–Ethan Paquin, The Boston Review“The language of ‘internally fissured realities’ … is dense, sound-driven, and erudite. The territory being mined is somewhere between language and geography, but there is a stubborn (and tenaciously coherent) essay on the modern here, particularly modern art. The equally tenacious reader will be rewarded by a sober sensibility.”
–Andrei Codrescu, Exquisite Corpse“Truly remarkable poems … Land Partition is a book for these and any other times, a monograph in a way for those incapable of speaking to be heard and felt.”
–Chris Mansel, The Muse Apprentice Guild